No, you are not reading The Onion. Yes, I’ve sometimes been known to do the rare satire. This isn’t one of these. 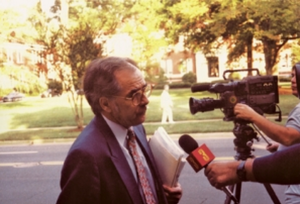 The Rev. Joe Chambers, pastor of Paw Creek Ministries (formerly Paw Creek Church of God), thinks that Charlotte’s recently rejected LGBT non-discrimination ordinances would, among other horrible ramifications, have banned the Bible in Charlotte. Or so he says in a rambling, seven-page letter addressed to Charlotte City Council members today. According to his email, he was also set to hand deliver a copy to The Charlotte Observer.

Chambers made a name for himself leading the charge against the “Angels in America” performance in Charlotte in 1996 and later advocating for cuts in public arts funding in 1997.

In his letter Friday, Chambers writes at length about America’s “downward spiral” — all caused by “sodomites” and transgender people.

“The sodomy and transgender struggle has become a ‘War Against God and the Holy Bible,'” Chambers says.

Transgender is the mutation of sodomy. Sin always follows a downward spiral. Sodomy is so devastating when put in control of someone’s life that they must descend deeper and deeper to get the same gratification in the flesh. The reason sodomites or transgender sodomites frequently commit suicide is their own fragile hold on the meaning in their lives God intended. To blame the people who resist this lifestyle is unfair and ridiculous.

And he’s none-too-pleased that Charlotte City Council considered the potential of LGBT-inclusive non-discrimination ordinances. Though, honestly, he’s a bit late to the game with his outrage. Council rejected those ordinances 6-5 nearly two weeks ago.

I must state several things that the ordinance as presented to the city council would have accomplished for the Gay Rights Agenda:

1. The Bible would have become an outlawed book in Charlotte, NC.

2. No church could legally preach against the sin of sodomy.

3. No church could legally sell or even give away a Bible.

4. Every church restroom would be opened to transgender persons.

5. Elderly ladies and gentlemen, our precious church members, would be too embarrassed to use the restrooms.

Yes, exactly. Because us queers have the power to undo the entirety of the federal Constitution, the First Amendment and hundreds of years of free-speech and religious-freedom jurisprudence, all with the stroke of a city-level public accommodations ordinance.

Chambers promises to spread the word about the ordinances (again, too late bro) during his Sunday service (it’s televised and on the radio! wowee!) and to his email list with 30,000-plus subscribers.

Honestly, I’m just glad to see good ol’ Joe’s still around and kicking it. I’d begun to worry about his health. Despite signing up as a speaker for the March 2 Council meeting, he didn’t ever actually show up. If we can’t get our  edification in person, I guess rambling, insane letters with no basis in fact or reality will have to do.