Charlotte’s municipal primary came with a bang, but left with a whimper. Excitement had built up among local residents, voters, endorsers and advocates. Candidate debates and forums were plentiful. News coverage was everywhere. Early vote numbers were promising, beating our last municipal primary totals by 43 percent.

But at the end of the night Tuesday (which I liveblogged; you can still see the archived coverage here), only 8.73 percent of registered voters turned out to the polls. That’s just 43,766 out of 501,173 registered voters — or, put another way, just a little over 5 percent of the city’s total residents.

And those 43,766 voters likely just determined who our next mayor and City Council members will be.

The turnout on Tuesday was higher than in our last primary, which turned out just about 6.7 percent of voters. Still, the results are abysmally and disappointingly low.

Jennifer Roberts leads incumbent Mayor Dan Clodfelter 35 percent to 25 percent in the Democratic mayoral primary. The race is likely headed toward a runoff and everything I’m hearing says Clodfelter will request one.

Pundits and observers are saying Roberts will take the lead in the second primary on Oct. 6.

Glenn Burkins of Qcitymetro.com is among them, his commentary today asking, “Can Jennifer Roberts be stopped?” He writes:

Put simply: Roberts has done what any politician in Charlotte must do if he/she hopes to occupy the corner office on the 15th floor of the Charlotte-Mecklenburg Government Center – she appealed to a racially diverse cross-section of voters, especially African Americans, who make up about 65 percent of the Democratic vote in a city that votes heavily Democratic.

Roberts seems to exploit this demographic shift better than most, and by regularly making herself visible at key events in the black community, she has managed to build a high degree of name recognition, and perhaps even trust, among black voters.

In Tuesday’s primary, Roberts had a strong showing in precincts that are heavily African American, winning just enough votes to beat Clodfelter for second place, but still generally finishing somewhere behind City Council members David Howard and Michael Barnes in those precincts. With Howard and Barnes now gone, look for their primary voters to go heavily for Roberts in October — and then again in November.

Regarding the Mayoral LGBT Vote 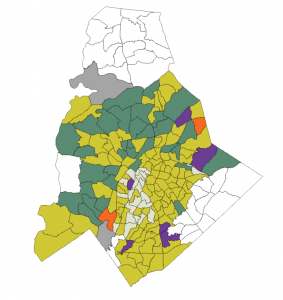 My purely anecdotal evidence — a survey of Facebook friends’ reactions and who they said they voted for — hints to me that the majority of the LGBT vote went toward Roberts. LGBT voters will likely be split again on Oct. 6, but could very well go to Roberts again.

In the precinct breakdown map to the right (you can click to enlarge), Roberts in yellow. Clodfelter is the light tan-ish color cutting north-south sliver from Dilworth into Myers Park and toward South Charlotte.

Roberts handily swept East Charlotte — including precincts in the popular Plaza Midwood and NoDa neighborhoods. These are key demographic areas for the LGBT vote, with the 28205 ZIP code having the highest concentration of same-gender couples in the state and other parts of East Charlotte, generally, being home to a large number of LGBT voters.

The only possible chance Clodfelter has to win in a second primary is if he picks up an important endorsement from David Howard, the third-place runner-up who fell only 643 votes shy of Clodfelter.

On the Republican side, Edwin Peacock handily defeated far-right opponent Scott Stone. Peacock is the obvious middle-of-the-road Republican candidate for Charlotte voters, especially for LGBT voters. He has hang ups on transgender inclusion, but is generally LGBT friendly. Stone, on the other hand, had decidedly opposed any and all LGBT-inclusion efforts and received the backing of far-right, anti-LGBT religious extremists like First Baptist Church Charlotte Pastor Mark Harris.

The coalition effort came in response to a failed LGBT-inclusive non-discrimination ordinance effort in March. Protections in public accommodations and in other services were rejected by City Council. Advocates hoped to ensure a six-plus majority vote for future ordinance efforts. On Tuesday evening, they said they reached that threshold.

A fourth candidate, Claire Fallon, also made the it through to the general election, according to the Charlotte Observer. Advocates and others had hoped Fallon might face a run-off with openly gay and TurnOUT-endorsed candidate Billy Maddalon. LGBT advocates had said Tuesday night that the race is “too close to call.”

In district races, each of the endorsed candidates took a victory. District 3’s LaWana Mayfield, District 2’s Al Austin and District 5’s John Autry each easily won in their races. Mayfield and Austin are the Council’s two openly LGBT candidates.

Breakdown: Charlotte will have pro-LGBT majority

The Democratic primary has likely determined who will be on our next Council. We haven’t seen a Republican elected in the general election for at-large positions in two cycles. The districts aren’t likely to change, so we’ll still maintain a 9-2 Democratic lead on Council. The LGBT-inclusive non-discrimination ordinance will most definitely come up again in the new term.

There are still uncalled races, but we are happy to report a VICTORY for a Pro-Equality council! #TurnOUTCLT pic.twitter.com/IbcSzArkyy

Here’s the breakdown of likely Charlotte City Council composition after the November general elections and why LGBT advocates were celebrating Tuesday tonight for a future consideration of an LGBT-inclusive non-discrimination ordinance:

Friendly incumbents returning to office with no challenger: Patsy Kinsey

The TurnOUT Charlotte! Coalition released a statement after election results on Tuesday. Here are the responses from the groups’ leaders:

Chris Sgro, executive director of Equality NC: “We are proud to stand with our partners at MeckPAC and HRC as we all celebrate this victory for Equality. Tonight, we brought home a strong win for the LGBT citizens of the Queen City. City Council now has the votes needed to pass necessary non-discrimination protections for gay and transgender Charlotteans. Although the election is over, we will continue to work with this group.”

Scott Bishop, board chair for MeckPAC: “Tonight, I am a proud resident of the Queen City. Charlotte is the second largest city in the nation to not have protections in their city ordinances for LGBT citizens. With the results of tonight’s election, we look forward to taking our great city off that list and making Charlotte a place where everyone feels safe and welcomed.”

Marty Rouse, national field director of HRC: “In March, the Charlotte community was devastated when the city council failed to pass basic LGBT non-discrimination protections. The residents of Charlotte today made their voices heard at the ballot box and voted for​a majority of p​ro-equality candidates — a victory that brings us one step closer to securing these critically important protections. We look forward to working with our local partners and the new city council to finally pass a city ordinance that protects LGBT Charlotteans from unjust discrimination.”