Abraham Lincoln would have long ago stopped recognizing his party. That shift began in the 1960s and continued through the rest of the 20th century while racists and other radical rightwingers flocked to the GOP as Democrats, heretofore the largest political party in the country, became increasingly more welcoming of minorities, women, LGBT people and better government.

Today, though, even Ronald Reagan, a much more recent party scion — and, to many a Republican, a symbol of all that Is holy, just and right with their ideology — would look on in anger and shock at what his party had become.

I’m not mad with Republicans. I don’t hate them.

I can’t even revel in the mindlessness of their candidates or their campaigns. It’s all getting too crazy (I do not use that word lightly).

Truly, I’m beginning to genuinely feel sorry for them.

What kind of party has two frontrunners like Donald Trump and Ben Carson? One is an egomaniacal reality-TV show star whose most-used word is “I.” (His fourth? His own last name.) The second is a previously “world-famous” neurosurgeon who, we now learn, believes the Great Pyramids were built by the biblical leader Joseph to store Egyptian grain.

And that’s just the tip of the iceberg. Both seem to have problems with reality and the truth. The Pulitzer Prize-winning PolitiFact has analyzed both candidates’ major statements throughout the campaign season. Neither have performed well. Seventy-six percent of Trump’s statements range from “pants on fire” lies to mostly false. Eighty-three percent of Carson’s statements get the same ratings. Neither of them have had even a single statement rated as truth.

And, still, Trump and Carson somehow both lead the GOP presidential polls.

This penchant for mindboggling un-reality isn’t limited to the national stage. Even in Charlotte, Republicans have somehow found it in themselves to throw their support behind head-scratching candidates like David Michael Rice. 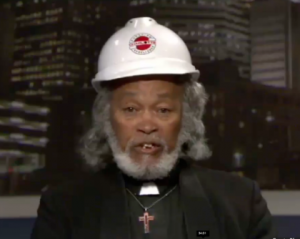 I’ve met Rice. He participated in the LGBT Community Candidates Forum in August. He seems like a genuinely nice guy… a great guy who also believes he was born “Lord God King,” wants to be mayor of “Rice Town” and once appeared at a local League of Women Voters WTVI forum wearing a hard hat, a large cross and priests collar. His campaign committee name this year was “Lord God Ricetown XV.” (BlueNC has more on some of that.)

A recent article this week by the Charlotte Observer suggests Rice’s presence in the race is “a reflection on the Republican Party’s difficulty in fielding candidates.”

The local Republican Party didn’t endorse Rice, to their leadership’s credit. But that didn’t stop Charlotte Republicans from blindly voting for him, with most of his votes coming from the GOP-dominated South Charlotte.

Though he came in last in the at-large races, Rice still got 27,205 votes citywide, with barely more than a single percentage point separating him and Pablo Carvajal, a newcomer who, though he has some misguided Libertarian views, is at least a credible candidate.

From that same Observer article:

Rice raised no money and attended few campaign events. The local Republican party did not endorse him.

But in 60 south Charlotte precincts won by Republican Edwin Peacock, the so-called “wedge” from South Boulevard to Monroe Road, Rice did pretty well. In fact, in those precincts he finished third in voting, and would have been elected as an at-large member if not for the rest of the city.

In those precincts, Republican John Powell was first with 24,164 votes. Powell narrowly missed out on the fourth and final at-large seat.

Pablo Carvajal, a Republican, was second there with 19,942 votes. Citywide, he finished sixth out of seven candidates. Rice was third with 17,612 votes. He was last in the city.

No doubt, both major parties have their fair share of wacky candidates and leaders. Democrats, well, we had Kentucky’s Kim Davis. There’s not always much room to judge. But I don’t think Democrats have ever let candidates like Trump or Carson rise to the top of our potential leadership.

And, meanwhile, I’ll sit not so much in judgment of Republicans, but in genuine concern. The world for them — in reality, quickly turning away from old institutions of hate and division and quickly diversifying — must be one heck of a scary place if Donald Trump, Ben Carson and Lord God King David Michael Rice are legitimate Republican choices for elected leadership.