The Weekly Wrap — the most important, impactful and interesting news stories, ideas, cultural trends or just plain-old fun and oddball items I found this week.

The biggest political story, by far, this week was the Fourth Circuit Court of Appeals’ decision to reverse parts of North Carolina’s far-reaching voter suppression laws. In particular, the appellate court reinstated same-day voter registration and the counting of out-of-precinct ballots.

If you didn’t have a chance to read up on the news — which could be a game changer for the Republican-backed election overhaul, including requiring voters to have photo IDs — you can catch up with these two articles from the News & Observer:
US appeals court blocks 2 provisions of NC elections law for November
Cooper asks US Supreme Court to block ruling on elections law

You should also read the NAACP’s statement in response. Also worth reading is this commentary by NC Policy Watch’s Chris Fitzsimon.

Writer Stephen Lovegrove lit up a firestorm of conversation and debate after QNotes published his commentary, “The problem of privilege at Elevation Church.”

The commentary was one of the most popular pieces on QNotes‘ website all week. It spawned conversations on Facebook and several comments — some in-depth and thoughtful — on the QNotes site itself.

Elevation Church is the largest church in Charlotte and in North Carolina. It’s skirted by with relatively little controversy on its anti-gay doctrines — some LGBT people even attend and believe the church is inclusive! (It’s not, by the way. Not by a long shot. It’s a Southern Baptist church, and that’s all really all you need to know, at base level, in the absence of any sort of LGBT-affirmative position statement from pastor Stephen Furtick and his fans.)

I am quite shocked, though, that the commentary didn’t get beat up more extensively by Elevation’s usually fervent followers. I’ve witnessed slews of Twitter and Facebook users go to the extreme to defend Furtick in the face of other controversies and scrutinies. They were all mostly silent this go ’round. I’m chalking it up to the obviously well-intentioned and compassionate, Christ-centered and scripturally based approach Lovegrove took in his commentary.

3. Free Speech and the state employee

Early in the week, I wrote a short piece on a North Carolina prison guard who had used a harsh anti-gay slur and cited scripture which could be interpreted as transphobic on his personal Facebook profile. The user had been brought to my attention by a colleague who know lives out of state. There’s no doubt the prison guard had violated his workplace policies, which, among other things, reminds state employees they are “public servants who are held to a higher standard of general conduct and ethical standards,” and prohibits “sexual, violent, racial, or ethnically derogatory” on social media and online.

The prison guard’s matter has been forwarded on for investigation by the North Carolina Department of Public Safety’s Professional Standards Office.

An acquaintance popped in on QNotes‘ Facebook page to provide a balancing viewpoint on free speech, one worth reading and mulling over:

I’m not completely sure I like the idea of government employees being fired for what they say/post on social media sites. This isn’t a set of practices/policies that will help LGBT folk in the long run.

(To clarify, the guard isn’t being fired. At least that I’m aware of. The matter’s just simply been forwarded for review and investigation.)

I’m not sure exactly how I feel personally about the intersections of free speech and government employment, at least as it regards the kind of derogatory speech currently prohibited by the state’s policies.

But, this debate does strike close to those over hate speech and policies that seek to generally ban it. I’m against those, no doubt.

Some more reading on that subject in particular:
“Nineteen arguments for hate speech bans – and against them”
American Bar Association: Debating Hate Speech

4. Random coolness from the week… 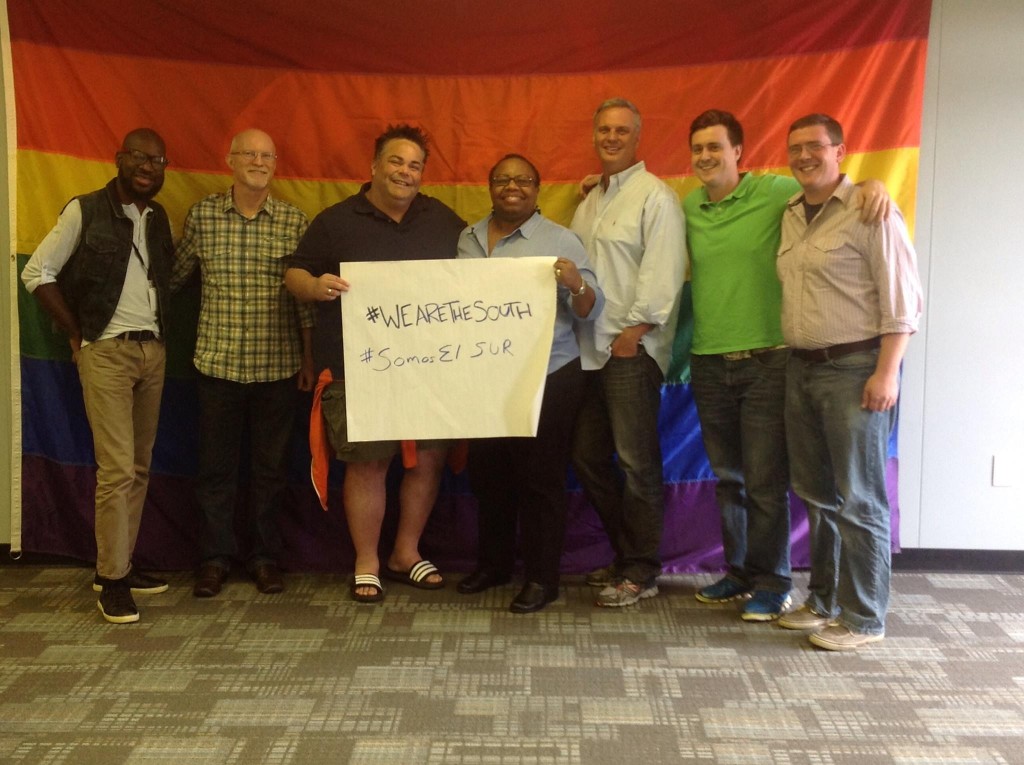 Above: A few local LGBT leaders in Charlotte, including me all the way to the right, standing in solidarity with the #WeAreTheSouth/#SomosElSur campaign. Pictured, from left: Jermaine Nakia Lee, Jim Yarbrough, Shane Windmeyer, Bishop Tonyia Rawls, Rodney Tucker, O’Neale Atkinson and moi.

Below: If you’ve never had a chance to stop by the Reading Room of the UNC-Charlotte J. Atkins Murray Library’s Special Collections department, you’re missing out. Just do it.