What’s up with Michael Weinstein and the AIDS Healthcare Foundation?

For months now, they’ve been at the forefront in opposing new HIV prevention methods like PrEP (pre-exposure prophylaxis), which uses drugs like Truvada to stop infection in HIV-negative individuals (read more about PrEP and how it works here).

Mr. Weinstein shows up in lots of news articles about Truvada in part because he runs a large H.I.V.-care organization, and in part because he gives colorful quotes. But he also shows up because he and the foundation stand more or less alone within the world of H.I.V.-prevention groups in their skepticism about PrEP.

(Disclosure: I am the editor of a “gay-oriented newspaper,” and I am not aware if this ad or any similar ads will be running; as editor I do not have any control over advertising in the newspaper, nor do I manage or sell advertising for the newspaper.)

Weinstein’s new ads include this special line: “Truvada poses a significant risk to the condom culture, which while it has eroded, has still prevailed among gay men for three decades.” 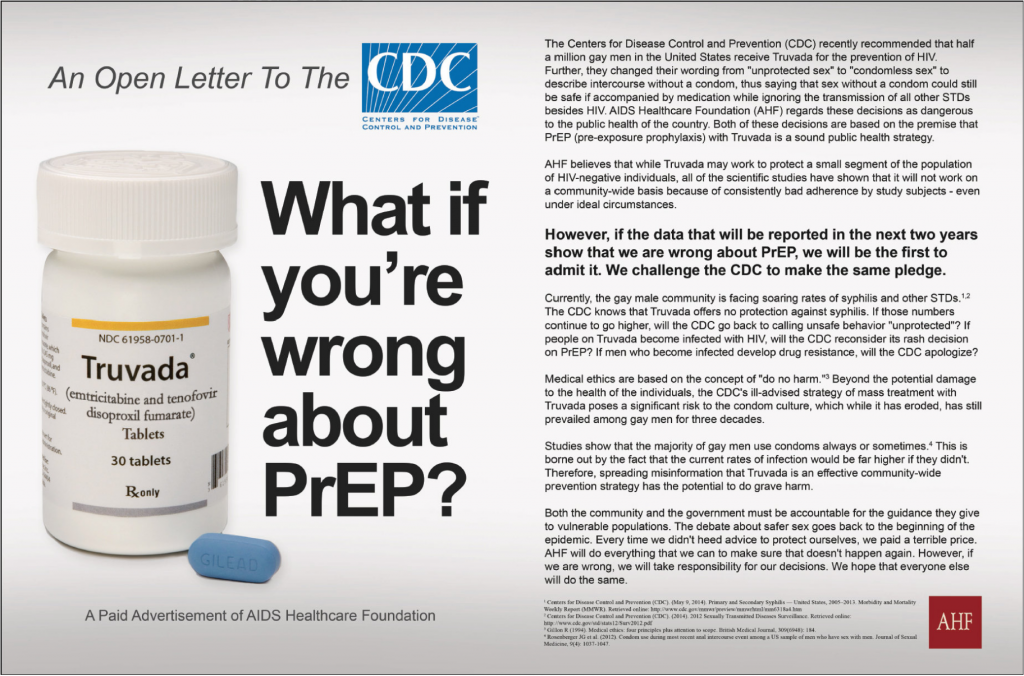 I hate to break it to Weinstein, but there’s no such thing as “the condom culture.” At least not anymore.

Have they been to a gay bar (outside of L.A.) lately? I haven’t seen condoms (with some exceptions) in my local or statewide gay bars in ages.

Have they not seen the stats?

There are myriad reasons for the increases in condomless sex. The proper public health, educational and preventative reaction to these increases should be to target those specific reasons — and to come up with new prevention methods (like PrEP, or “treatment as prevention”) that take into account this new reality.

But what Weinstein and AHF want is a return to olden days — decades-old public health strategies and safer sex messages that have proven, time and time again, to be ineffective. It’s almost puritanical — “You’re not having sex the right way,” Weinstein screams.

Public health policy cannot be predicated on hopes and dreams. It must be rooted in fact. Instead, Weinstein and AHF are living in a mythical fantasy world that doesn’t deal with honest facts about today’s gay men and their sexuality and sexual behaviors.

Did you miss it? After a hectic news month, I returned yesterday with a “Weekly” Wrap reflection on a month of marriage equality madness. Check it out.