[The first “Dear Michael Weinstein,” tackled Weinstein’s and his AIDS Healthcare Foundation’s advertising campaign this week against pre-exposure prophylaxis and the use of Truvada, along with their ridiculous notions about some “condom culture.” If you missed it, check it out here.]

Michael Weinstein’s AIDS Healthcare Foundation’s ads against the use of Truvada as a pre-exposure prophylaxis (PrEP) are making their rounds in newspapers across the country this week.

From their press release on the campaign:

AHF’s ad, written as an “Open Letter to the CDC: What if You’re Wrong About PrEP?”, will first appear Monday, November 17th in The Hill, a daily newspaper serving and reporting on elected officials and government staffers in Washington DC. AHF’s CDC/PrEP ad will then run over the next ten days in newspapers and magazines in seven markets or cities nationwide: New York, Los Angeles, San Francisco, Oakland, Dallas, Washington, DC and South Florida.

For an “open letter to the CDC,” it seems awfully strange Weinstein and AHF wouldn’t be running their ad in an Atlanta newspaper — ya know, since the CDC is based in Atlanta.

And, for that matter, there’s little representation for the South as a whole.

Not in the Virginias or the Carolinas. Not in Tennessee or Georgia or Alabama. Not in Arkansas or Mississippi or Louisiana or Oklahoma.

With the exception of Dallas and South Florida, there’s not a single other ad being run anywhere in a region where, as The Washington Post reported this year:

Southern states now have the highest rates of new HIV diagnoses, the largest percentage of people living with the disease and the most people dying from it, according to Rainey Campbell, executive director of the Southern AIDS Coalition, a nonprofit serving 16 Southern states and the District. Fifty percent of all new HIV cases are in the South. 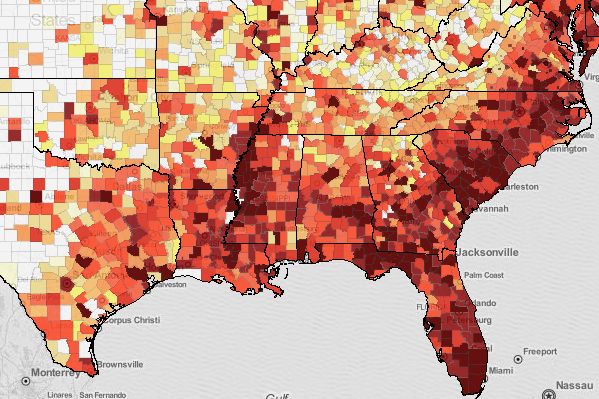 Persons living with an HIV or AIDS diagnosis in 2010. Map screenshot via AIDSVu.

Weinstein and AHF are most upset that the CDC has recommended “that 500,000 men-who-have-sex-with-men and other high-risk individuals go on PrEP,” according to their release.

Yet, their ad blitz isn’t even going to touch a significant portion of those half-million men. Nearly a third of all LGBT adults in the country live in the South.

If Weinstein and AHF were truly concerned about the health and wellbeing of the community they are trying to serve, you’d think they’d be targeting their message equally and in such a fashion that it reaches significant portions of that community.

And all this goes to show what’s really at play here:

Actual real people affected by HIV/AIDS — many of whom could benefit from PrEP and other prevention methods other than Weinstein’s failed “condom culture” myth — be damned.