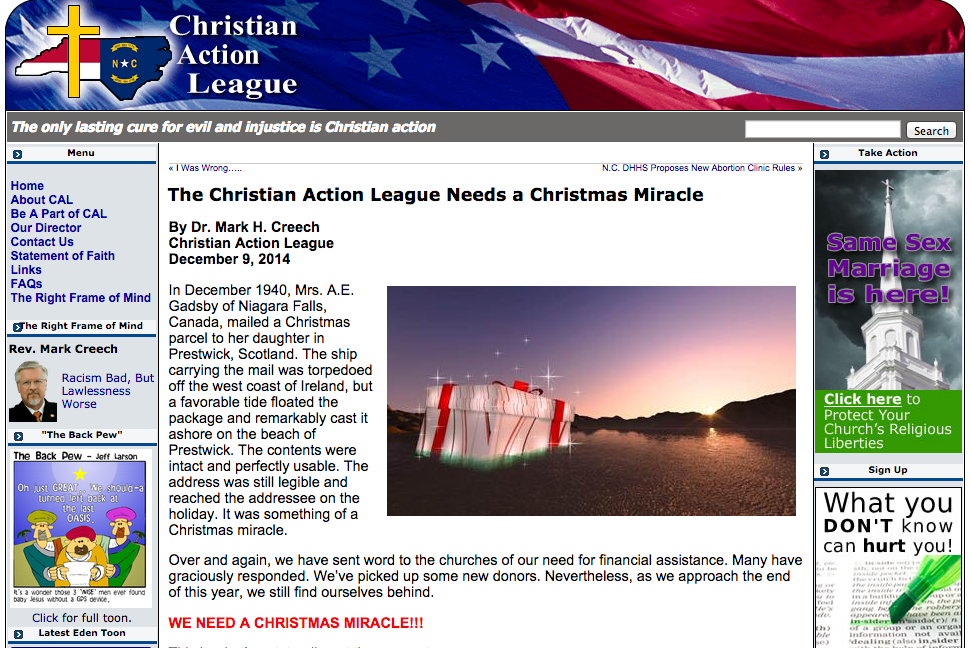 Bigotry doesn’t pay. In fact, it can break your bank. And a leading anti-LGBT advocacy group is learning this lesson the hard way.

The Christian Action League of North Carolina,which helped lobby for the state’s anti-LGBT constitutional amendment, told its members and supporters today that it’s nearly $15,000 in debt, including outstanding office rent payments and back pay to a writer who contributes to its website.

The group is closely linked to leading statewide anti-LGBT lobbyist Tami Fitzgerald and her North Carolina Values Coalition, the primary proponent of the amendment.

But members and affiliated churches don’t seem to be too interested in helping out, with the league saying it “would be nothing less than a miracle for the Christian Action League to garner the necessary funds to clear out its debt before the beginning of the new fiscal year.”

Seems other North Carolina churches are quickly learning that hate isn’t a winning (or profit-making) strategy.

“Over and again, we have sent word to the churches of our need for financial assistance,” League Executive Director Dr. Mark Creech wrote in an email and post to his website. “Many have graciously responded. We’ve picked up some new donors. Nevertheless, as we approach the end of this year, we still find ourselves behind.”

The Christian Action League also works on a variety of other issues. It has taken on anti-lottery, anti-alcohol, anti-marijuana and anti-choice stances.

Some might remember a few years ago, when the Christian Action League was caught publishing an error-filled, anti-gay propagandist diatribe from the Mary Frances Forrester, wife of anti-LGBT amendment sponsor, the late N.C. state Sen. Jim Forrester. Back then, Creech and the League had to issue public corrections due to Forrester’s wildly inaccurate and mistaken claims.