“The dems [sic] researched this building full and this was the perfect place to hold this meeting,” Turner wrote in a Facebook conversation on Saturday.

Click here for a screenshot of some of the conversation (opens in new window). You can see the Facebook thread here. 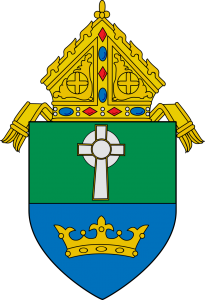 So, why did they meet there?

It’s an important question especially in light of news yesterday that the Catholic Diocese of Charlotte has fired a gay man from his substitute teaching position because he announced on Facebook he plans to marry his same-gender partner.

From the diocese’s newspaper report on Friday (emphasis mine):

A retired dramatics teacher from Charlotte Catholic High School has been told he cannot work as a substitute teacher at the school after he publicly announced he is planning to marry his same-sex partner later this year.

Lonnie H. Billard, who had signed up to be a substitute teacher at the high school and was scheduled to teach during January, wrote on his Facebook page that he and his gay partner were planning to marry in the summer of 2015, according to Diocese of Charlotte spokesman David Hains.

According to Hains, as soon as Charlotte Catholic High School officials learned of his announcement, they informed him he could not work as a substitute teacher because of his opposition to Catholic teaching.

All employees of the diocese agree upon their employment to follow the diocese’s ethics policy and a personnel policy that requires them to conduct themselves in a manner consistent with the teachings of the Catholic Church.

According to the diocesan human resources office, substitute teachers are classified as temporary employees. They have no benefits but they are subject to the same policies as other employees.

“People who work for the Diocese of Charlotte agree that they will not oppose the teaching of the Catholic Church. We cannot and will not employ a substitute teacher who opposes Church teaching,” Hains said in a Jan. 9 statement.

It’s not the first time the diocese has fired gay employees, as the diocese’s newspaper even admits. In 2012, the diocese came under fire after it terminated a popular gay music director for marrying his partner.

The diocese stresses that marriages between LGBT people are “a public act that is in disobedience to Church teaching.”

But this is more than just a couple incidents of discrimination.

That “Church teaching” Hains was going on and on about? Well, it’s none-too-welcoming to LGBT people, whom the church considers both “intrinsically disordered” and “objectively disordered.”

From the church’s Catechism and its teaching on homosexuality:

Basing itself on Sacred Scripture, which presents homosexual acts as acts of grave depravity, tradition has always declared that “homosexual acts are intrinsically disordered.” They are contrary to the natural law. They close the sexual act to the gift of life. They do not proceed from a genuine affective and sexual complementarity. Under no circumstances can they be approved.

Oh, it gets worse.

In 1986 — at the height of the AIDS Crisis as gay men lie dying in the thousands — Pope John Paul II issued his first major statement on homosexuality, delivered by none other than Cardinal Joseph Ratzinger, who would later become Pope Benedict XVI and, at the time, was prefect of the Congregation of the Doctrine of Faith (the same body formerly known as the Supreme Sacred Congregation of the Roman and Universal Inquisition) (emphasis mine):

Although the particular inclination of the homosexual person is not a sin, it is a more or less strong tendency ordered toward an intrinsic moral evil; thus the inclination itself must be seen as an objective disorder. Therefore special concern and pastoral attention should be directed to those who have this condition, lest they be led to believe that the living out of this orientation in homosexual activity is a morally acceptable option. It is not.

In 2012, during his Christmas message to the Roman Curia, Pope Benedict XVI called LGBT people and their desire to marry and form families of their own a “manipulation of nature.”

And, soon after he took office, and in keeping with his former position as head of the Inquisition, Pope Benedict XVI engaged in an anti-gay witch with the goal of rooting out any and all gay people from the church’s seminaries in the U.S.

And, back on a local level, the diocese also recently supported an anti-LGBT nun who told students at Charlotte Catholic High that masturbation and an absent father makes boys gay and that gay men have 500-1,000 sexual partners in their lifetime. Instead of offering that so-called “pastoral care” to gay students, the diocesan Bishop Peter Jugis condemned them for daring to challenge the authority of the nun, the school’s priest and church teaching: “There simply is no room in the Catholic Church for such displays of uncharitableness and disrespect,” Jugis said, obviously clueless about his church’s own displays of disrespect against LGBT students and families.

To be fair, there are some signs of change and support. Pope Francis has recently offered a more conciliatory approach to issues around homosexuality. Some priests in the local diocese, including Our Lady’s pastor, who presided last year, participate in an annual Eucharist service specifically for LGBT people (despite the church teaching that homosexuality is a “mortal sin” upon which one can be denied the Eucharist) held at St. Peter Catholic Church — the same parish punished for its LGBT-friendliness by Bishop Jugis, who once ordered a large “Marriage = One Man One Woman” banner be hung on the outside of its sanctuary.

But none of whatever slight support we have from local priests or the current pope changes church teaching or prevents the unjust treatment of LGBT people by the church.

The church’s teachings and practices are in direct contravention of the Democratic Party’s values — and Mecklenburg Democrats have no business inviting their members, some of whom are LGBT, into a space that is inherently dangerous for them.

By the time all of this came to my attention, it was far too late to change the Mecklenburg Democratic Party’s meeting location. But, in the future, they should opt to steer clear from the Catholic church or any church, for that matter, which condemns a key constituency of the party.