Dr. Michael Brown, a rightwing religious leader from the Charlotte, N.C., area, delivered a lengthy response to Newsweek‘s recent commentary on the Bible by Kurt Eichenwald, entitled, “The Bible — So Misunderstood it’s a Sin.”

Brown, who is most known locally for his opposition to LGBT equality initiatives and his protests of local LGBT events, sets out to present an opposing view to the original commentary, which had argued that most Christians and evangelicals today, especially the political types, simply don’t even know what the Bible really says.

I couldn’t make it through the first parts of Brown’s response without coming to a full stop, mouth open, shaking my head at the sheer audacity of Brown’s comments:

The article begins with the word “They,” but we are not told who “they” are.

Is it those who “wave their Bibles at passersby, screaming their condemnations of homosexuals”? If so, why even mention such people – especially in the opening line of the article – since they are absolutely miniscule [sic] in numbers (less than a fraction of a fraction of a percent of evangelicals) and they are universally condemned for their actions and attitudes by virtually all circles of evangelical Christendom.

Apparently, Brown has forgotten how many times he himself has been among his self-described “minuscule” of street preachers who, in the words of the original commentary author, “wave their Bibles at passersby, screaming their condemnations of homosexuals.”

Most notably, in July 2009, Brown led a group of 500 of his followers in holding a mass protest and what could really be described as a worship service and prayer rally outside of the Charlotte’s annual LGBT Pride event.

Wearing red shirts reading, “God has a better way,” Brown and his followers proceeded to call out prayers, scripture passages and preachings from speakers set up across the street from the event.

Present with them was radical Lou Engle, a colleague whom Brown had invited earlier that month to deliver a message of inspiration to Brown’s congregation, FIRE Church of Concord. 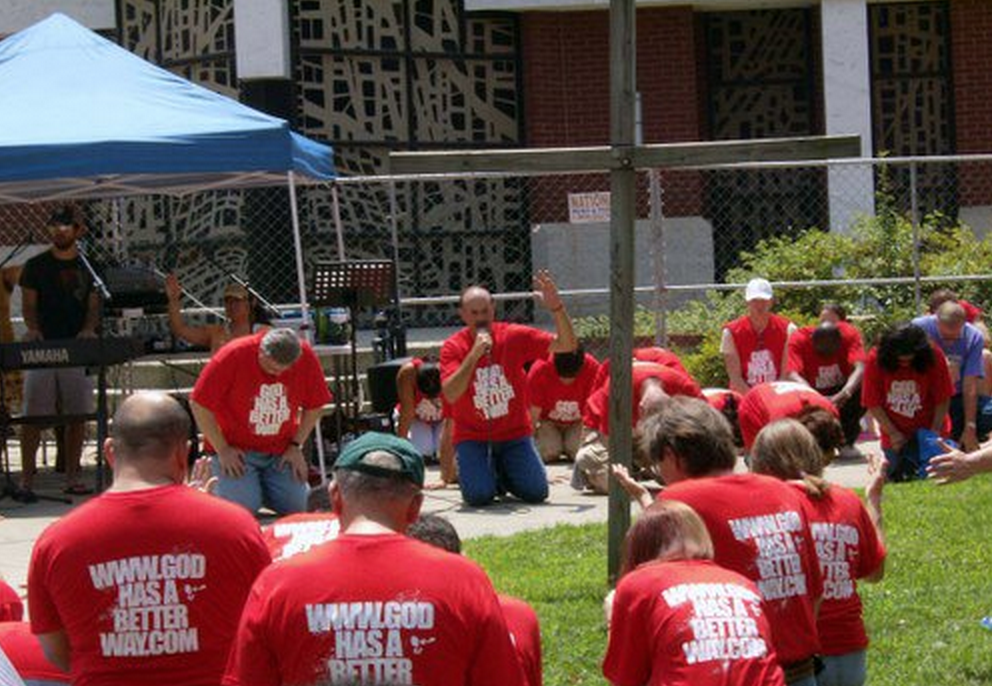 Lou Engle, kneeling with microphone, with Michael Brown kneeling to his right, at a 2009 rally outside an LGBT Pride event in Charlotte, N.C. Photo Credit: Matt Comer.

At the church’s worship service, Engle called social debates over LGBT equality a “great battle” and said Christians need to make “peace through war,” saying, “Revelation demands participation … Sometimes we use prophecies as toys instead of bombs to make war with in the Spirit.”

And, in describing his prayers to root out the “homosexual Jezebel spirit” in California, Engle said he prayed everyday with a “focused, laser beam.”

“There’s power in that kind of prayer,” Engle exclaimed. “That’s a prayer,” he said, making machine gun sounds and adding, “Shoot everything!”

Brown saw it appropriate  — given his own history of violent and militant rhetoric — to invite Engle to attend the protest of that 2009 Pride event, where they both took to the microphone and waved their Bibles, screaming condemnations at homosexuals.

But Brown says these kinds of folks are “universally condemned.” They’re a minuscule, he says.

So, did Brown simply forget his own and his colleague’s extremism? Did his brain blank out on the memory of this 500-person protest in 2009 (not to mention the many others in recent memory)? Was it a simple slip of the tongue? A mistake? Something he wishes to correct?

Or, is Brown simply a hypocrite, a liar or a manipulator who spins words and rhetoric to fit whatever politically and religiously expedient message he’s attempting to spread today?

I’ll leave you to ponder those questions.